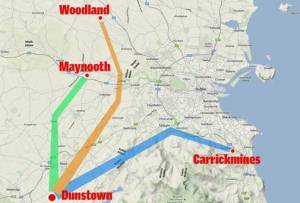 Yesterday’s Sunday Independent revealed that EirGrid are planning a massive second wave of pylons through the heart of Kildare. After initially denying any plans were taking place, EirGrid’s hand was forced when the EU Transmissions System Operations of Electricity confirmed that in fact, three new routes were being looked at.

It might be the hope that in proposing different routes communities will be pinned against one another each vying  for another route to go ahead, but that’s just not the case. Rural communities and action groups are standing together on this issue and are campaigning in unison for the cables to go underground.

It’s disheartening that the Labour party are treating this as a political issue when what’s at stake will affect so many people. At the Labour party conference Pat Rabbitte “told delegates the issue possessed the real potential to seriously damage the prospect of Labour candidates in the local elections.” (Irish Independent 30/11/13)

Two weeks later, Labour leader, Tániste Eamon Gilmore acknowledged Minister Rabbitte’s poor public performance saying that “Politically you have to be seen to bring people with you and that has not happened.”  (Irish Independent 15/12/13)

I think the people affected by these planned pylons would much rather the Tániste actually acknowledge the concerns of the communities impacted, rather than “be seen” to bring people with him.

There are wide reaching consequences to the proposed EirGrid plans. These Pylons will create a blight on the landscapes they travel through, in turn creating serious economic problems in terms of a direct impact on house prices and farm values. There’s also the enormous, un-costed impact this will have on Ireland’s green image abroad. Fáilte Ireland are currently examining the specifics of the plans but have acknowledged that tourist amenities could be at risk.

Perhaps most worryingly, there has not been a full evaluation of the health and environment impact that these Pylons will bring.

It’s high time both the government and EirGrid acknowledged this and started listening to and communicating with the people.

I’m encouraging everyone who might be impacted by this planned development to submit your concerns to gridlink@eirgrid.com by 5pm next Tuesday Jan 7th.