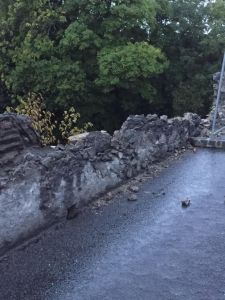 Following a collision on Saturday evening the oldest bridge over the river Liffey has been closed until further notice. The impact of a tractor to the parapet of the bridge has left a long section of the bridge dangerously unguarded from the drop to the river below.

I’ve been in contact with the area engineer and we’ve been to see the damage to the bridge which is considerable. The bridge was subject to safety works only last year but the impact was so severe that there’s no option other than to close the route to traffic.

Records note that the bridge may have been in place as early as 1656. Being the oldest bridge over the river Liffey however, has added complications to the repair works.

This bridge is a preserved structure – a national monument – and as such, Kildare County Council cannot touch it until engineers are given Departmental approval.

I’ve been told that such are the nature of the works required that the bridge could even be closed to traffic for a period of months. This will have major implications on both people travelling from and through the village and on Thomastown residents who will see heightened traffic on what is already an extremely busy rural route.

There is no doubt that this will also have a very serious impact on the few local businesses in Caragh who now find themselves situated in a cul de sac.

This morning I’ve written to the Transport Minister, Paschal Donohoe to highlight the two solutions that are now required in the short and medium term:

A new bridge has been talked about for decades but unless plans are progressed in the very near future we are facing serious traffic accidents and the isolation of an entire village.